You are here: HomenextHistorynextA Theatre For The New Town

A Theatre For The New Town 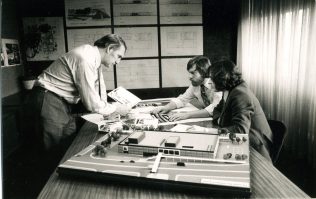 zoom
Ray Gorbing with model of the GCT 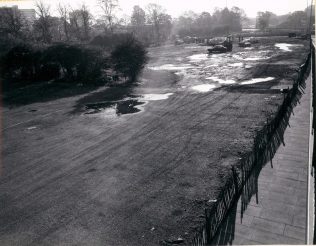 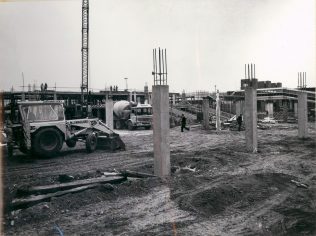 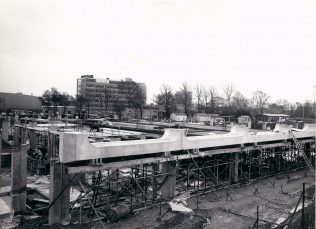 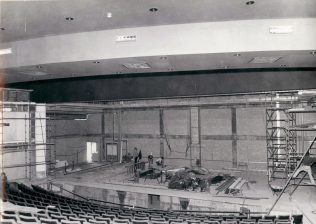 The first community to be selected as a new town, Stevenage was built in the 1950s and 1960s by the Government who wanted to move people away from Inner London. Six new neighbourhoods were created and the Queen performed the official opening of the town in 1959.

From the early 1960s there was discussion for the need for an Arts and Leisure centre in the town. The original draft of a design brief created in May 1966, envisaged a 450 seater theatre with a workshop, green rooms, restaurant and exhibition area.  It would be located near the new railway station and have space for outdoor concerts and a water feature.

In 1968 the Stevenage Arts Trust resolved to commence the building of an Arts Centre on land west of the Ambassador Bowling Centre and the present London Road. This land had been granted by Stevenage Development Corporation. Messiers Vincent, Gorbing and Partners, Architects, drew up detailed plans for a 488 seat theatre which would cost £300,000 to build but the scheme was put on hold due to a lack of capital.

In 1968 a feasibility study was commissioned by Stevenage Urban District Council and the Stevenage Development Corporation for a combined Arts and Sports Centre. London Road was the preferred site and was chosen over Roaring Meg and King George V playing fields. The scheme was to be financed by a lease back agreement with a merchant bank.

In 1971 the final account brief for the combined Arts and Leisure Centre was accepted. The three level centre would be located behind Daneshill House and linked to the shops and railway. In 1972 the final design drawings were completed with the cost estimated at £1,610,218.  On 14th June 1974 Baroness Lee, the former Labour Minister Jennie Lee, laid the foundation stone for the new centre and work commenced on its building. Eventually costing £2.7 million, the Centre opened on 3 November, 1975.

The theatre was originally to be named the Danesgate Theatre but it was Roger Dyason, the first Arts’ Manager of the Centre, who suggested that the theatre should be named after Gordon Craig, an influential and radical theatre practitioner who had been born in Stevenage in 1872, the son of actress Ellen Terry. The programme for the opening month concentrated on performances by local artists. These included The Gilbert and Sullivan Story by the Lytton Players, Twelfth Night by the North Herts’ Youth Group and concerts by the Stevenage Youth Orchestra (accompanied by the Stevenage Ladies’ Choir and Stevenage Male Voice Choir) and Stevenage Symphony Chorus and Orchestra. Larry Adler, billed as ‘the world famous mouth organ virtuoso’ provided entertainment from a household name and there were film showings and pop concerts.

The Leisure Centre was officially opened in February 1976 by HRH The Duke of Edinburgh, accompanied by the Director of Leisure Services at Stevenage Borough Council, Mr M. L. Banks.

Even after it’s opening, the final design proved controversial. It attracted both admirers and those horrified at the aesthetic of the building.  Panels of glass and reinforced plastic had been used to insulate the building against noise from rail, road and overhead aircraft. The orange cladding led to the Centre being known locally as ‘Gorbing’s Orange Box.’  Theatre and sport under one roof was a ground-breaking concept and not everyone approved of the innovation.

On 6 May 1977 the design architect, Ray Gorbing, presented a sculpture gift to the Leisure Centre. This was an interpretation of the family logo which the architects had designed for the building. Gorbing, in his speech, recognised the importance of Bill Lawrence, Chair of the Leisure Services Committee, to the success of the project.  Lawrence had been ‘involved with all phases of the development.’ This included ‘the account brief, early sketch designs, models and production work.’