You are here: HomenextMemoriesnextGreg Arrowsmith's Story

From Little Chef to The London Palladium, via Stevenage

Greg Arrowsmith describes becoming one of the UK’s most in-demand musical directors as “accidental”. It seems surprising given his accomplishments – his career high points include working on blockbuster films such as Rocket Man and Paddington 2, performing at Buckingham Palace for HRH The Prince of Wales and conducting or musically directing countless shows around the UK, overseas and in London’s West End. But it was a call to come to Stevenage‘s Gordon Craig Theatre in 1997 that truly changed the course of his life.

Studies in Medieval Church Music at Cardiff took Greg from his Nottinghamshire home-town of Retford in the mid-1990s – studies that were soon to be abandoned. It was his talent for sight-reading (playing written music seen for the first time) that made him a natural accompanist for auditions and filling in for absent musicians for musical theatre. Kevin Wood, then producing Snow White, a pantomime in Guildford was urgently in need of a pianist-cum-assistant musical director and he’d heard of a talented young musician based in Cardiff. Greg was airdropped into Pantoland in Guildford and the lengthy professional relationship with producer Kevin Wood began.

It was Kevin Wood’s pantomime Jack and the Beanstalk at The Gordon Craig the following year, 1997, that was to be Greg’s professional debut as lead musical director. His studies at Cardiff had continued, just about, alongside a part-time job at Little Chef. Kevin Wood was confident of the young musician’s abilities and was keen to let them shine in Stevenage, where Wood’s own panto producing career had begun 16 years earlier. Greg put Toby Anstis, Jess Conrad and Colin Devereux through their musical paces in rehearsal and the show opened on December 5th 1997 – Greg was 21. 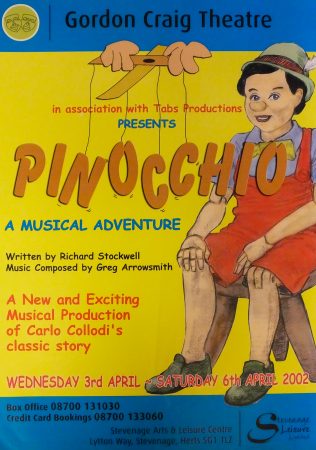 Bob Bustance, the Gordon Craig’s Arts Manager, was also impressed by Greg’s abilities to lead the show from the orchestra pit. Bob was keen to fulfil the Gordon Craig’s true potential: a place not just to receive touring shows but to create new ones. Bob soon teamed Greg up with the Craig’s burgeoning young people’s theatre company and, before too long, Greg’s compositions for the young performers became full-blown new musicals. Added to preparations for pantomimes and fixing a band to give new regular Sunday jazz concerts in the Craig’s restaurant, Greg found himself spending eight months of the year at the Gordon Craig. Stevenage’s gain was to be medieval church music’s loss – Greg left his studies in Cardiff. And said goodbye to Little Chef.

The Gordon Craig’s own productions began to tour the UK – 1999’s Noel and Gertie, featuring music composed and performed by Greg, took him to theatres up and down the country. The Craig’s own Easter and Summer musicals grew in ambition and scale and its pantomimes became amongst the longest running in the country and featured ever bigger celebrity names, playing to sold-out houses. Before too long, London’s West End was calling Greg. 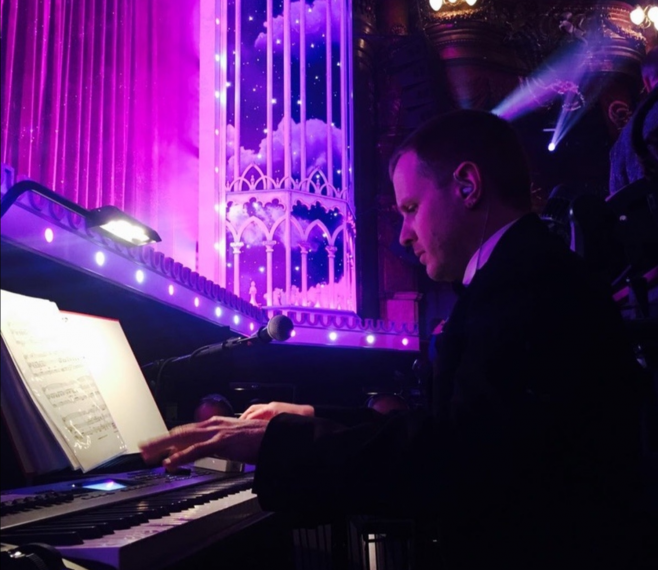 Greg Arrowsmith at the London Palladium

2002 saw the musical Chitty Chitty Bang Bang open at The London Palladium. Appearing in the orchestra in the pit, with Michael Ball, Anton Rodgers, Richard O’Brien and Brian Blessed on stage, was the youthful Greg Arrowsmith – it made him one of the youngest ever conductors at The Palladium. West End productions of Hairspray, The Rise and Fall of Little Voice, Strictly Ballroom and The Rocky Horror Show all followed, as well as UK tours of Chess, Jolson & Co., Happy Days and Aspects of Love alongside regular returns to the Palladium to MD yearly pantomimes. Greg is also to be regularly found guest conducting the British Philharmonic Concert Orchestra and orchestral events for the BBC.

Greg is currently one of the UK’s busiest musical directors, music supervisors and arrangers and yet he still found time to form Melodramatic Productions in 2014 with long term collaborator Matthew Parry. Its mission: to bring stories and classical music vividly to life for young people through recordings and concerts. From conducting symphonies transformed into funny, action-packed, stories to “instrument petting” sessions with their young audiences, Greg is committed to making classical music accessible to all.

“Not bad for a working class kid from Retford”, reflects Greg, “and The Gordon Craig Theatre was a crucial part of my journey.”

Written by Andy Purves, with thanks to Greg Arrowsmith