You are here: HomenextMemoriesnextKevin Wood’s Story

“What do you know about Panto?” asked Bob Bustance, The Gordon Craig’s newly appointed Arts Manager. It was early 1985. The pair were marking the opening night of Channel Theatre Company’s tour of The Birthday Party, the darkly humorous play by Harold Pinter which Kevin Wood had directed. “Straight plays” were Channel Theatre’s and Wood’s stock-in-trade. He confessed to Bustance he had no experience of creating pantomimes yet within months the posters were being printed: “Channel Theatre Company in association with The Gordon Craig Theatre presents… Snow White, written, directed and produced by Kevin Wood”. Wood’s expedition into panto had just begun.

When Bustance joined the Gordon Craig in 1984 he was alarmed to find that the festive show was only running for 15 days and failing to turn a profit. He knew that a successful Christmas offering didn’t only mean happy Stevenage audiences, it was vital to the year-round financial viability of the theatre. His brief to Wood: bring the tired panto format up to date. A broader, higher quality entertainment offer was needed – this was a new era in theatre heralded by arrival of mega musicals Cats and Starlight Express. The average panto had trundled along for too long, relying on reuse and recycling of scripts, songs and sets – a journey not far from the form’s Victorian beginnings. Bustance could see how irrelevant they were becoming to Stevenage’s audience. Panto needed a makeover!

Picking up the gauntlet, Wood cast well-known TV celebrities for his first panto – comedy actor Nicholas Smith of Are You Being Served? and Nicola Bryant, then playing the assistant to TV’s famous Time Lord, in Doctor Who. He bought in spectacular sets that only just fitted on the Gordon Craig Theatre stage, hired great musicians who arranged songs recognisable from the charts of the day and the gags in the script made sure it was to be a celebration of Stevenage’s local culture. He’d enlisted the help of actor and panto stalwart Peter Denyer after a phone-call that began with: “Peter, how do you write a panto?”

But just as the ingredients for Wood’s panto were being gathered the production was very nearly scuppered. At a meeting of the board of trustees of Channel Theatre Company, when it came to “any other business”, Wood announced that Channel were to be co-producing a pantomime in Stevenage. To Wood’s surprise, there was consternation amongst the members of the board – Channel was a serious theatre company, publicly funded… “it didn’t do commercial”. A vote followed: the pantomime wasn’t to go ahead. Wood left the meeting bewildered. Upon returning home, Wood took a call from the chairman of the board offering: “a simple solution… go and form a new limited company tomorrow.” Kevin Wood Productions was born. In the end, despite the posters and flyers all over the town saying so, Channel Theatre Company never did co-produce the 1985/86 Stevenage pantomime – a new player had entered the scene! 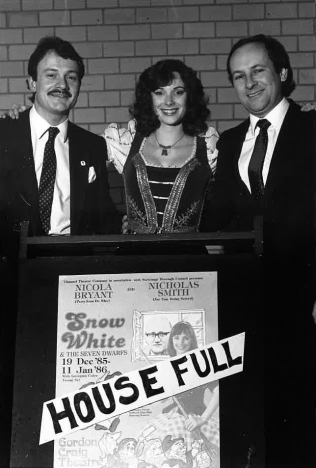 Snow White opened in December and was loved by Stevenage audiences. Wood stayed in town for the entire run, studying the show to make every moment the best it could be. And very soon the “house full” signs were turning away those not lucky enough to have tickets. The crowds meant a healthy profit for the theatre’s coffers – good news for Bob Bustance – The Gordon Craig was relying on ever-shrinking financial support from the local authority to offer a full year’s varied programme whilst keeping ticket prices low.

Soon after the final performances of Snow White in early 1986, Wood had received four requests from other theatres around the country – could he weave the same magic on their tired old pantos? He embraced the challenge, resigning from Channel Theatre Company that year. Two years later, Kevin Wood Productions Ltd. was responsible for fourteen UK pantomimes including Stevenage’s at The Gordon Craig. 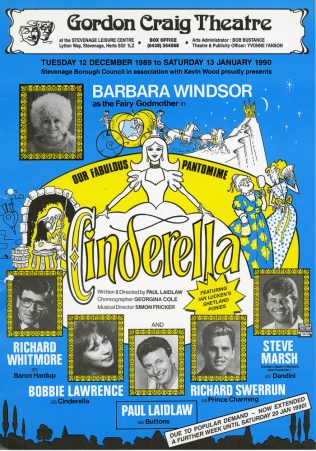 With a devoted and growing audience in Stevenage, Wood’s pantos at the 500-seat theatre would soon become one of the longest running seasonal shows in the country with up to 130 shows between November and February playing to well over 90% capacity. Described by Wood as “an overachieving minnow”, the relatively small Hertfordshire theatre attracted bigger and bigger celebrity names as pantomime shed its lowly status, playing host to the likes of Barbara Windsor, Bradley Walsh and Toyah Willcox. 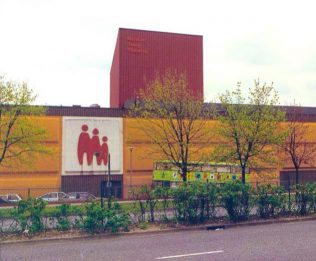 So what was Wood’s secret to making a pantomime hit? In answering, he encourages us to look at the original logo for The Gordon Craig Theatre, “there was a vision for the building, a place for families. What I did reflected that ambition. The show needs to work constantly on multiple levels: people who know the story – parents and grandparents, older children who would probably rather be somewhere else and younger children. They all need different things – I’m constantly balancing sophisticated humour with what a child might find alienating or boring. The whole family group sees the show through the eyes of the youngest children.”

Twenty years after that first Snow White in Stevenage, Wood formed First Family Entertainment Ltd, a major rival to the largest pantomime producers, and was soon turning over £14m in a single panto season. Wood remarks, “I used the pattern I developed at Stevenage so many times that it’s just become part of what today’s pantomime business has become. The Gordon Craig, led by Bob Bustance, is a really very important part of that story.”

Written by Andy Purves, with thanks to Kevin Wood.