You are here: HomenextMemoriesnextPantomime Disaster

I was a music student at Sheffield University and during the Christmas break I was recruited to the backstage team at the Gordon Craig Theatre. My father was on the lighting crew as a follow spot operator (having been involved in the Lytton Players). My job was to change scenery, help with quick costume changes off stage and also to lay the charges for the smoke bombs. 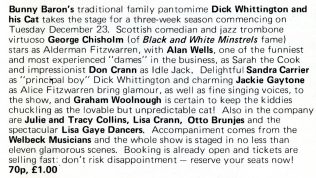 Brochure Details for 1975 Pantomime at The Gordon Craig Theatre

We rehearsed and were ready to perform. The weather was fairly unkind, and the gales were building up. If I remember correctly, we gave a few performances before disaster struck. During the interval we prepared the set and the dancers were getting ready on stage. This scene I ought to explain was in a middle eastern court so the dancers were scantily dressed. Above the stage is a fly tower and the idea is that if there is a fire the vents in the roof of the fly tower would open so as to keep the fire on stage and not in the auditorium. These vents were pretty new and were made of reinforced glass. The gales were so strong, however, that the vents were forced open and the pressure was such that the glass broke. This showered glass on the stage narrowly missing the cast and crew. As far as I know no-one was injured but the shock was considerable, and the curtain never went up for the second half of the show.

Our thanks to Nigel Hildreth MBE