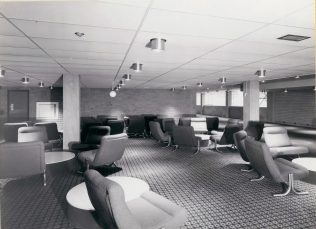 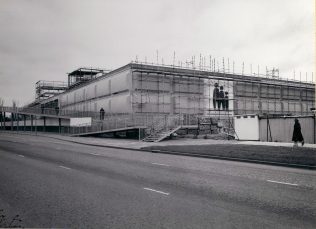 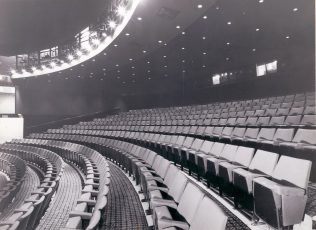 A late arrival to the fabric of Stevenage’s burgeoning post-war new town, The Gordon Craig Theatre opened its doors in 1975. Taking its name from Edward Gordon Craig, the internationally renowned theatre practitioner who was born less than a mile away, the theatre has become a key part of the cultural offering of the area. The 500-seat space was originally designed to accommodate orchestral concerts alongside produced and visiting theatrical events and has also been used to screen films and host organ recitals. The Theatres Trust describe it as “probably the best-designed civic entertainment centre of its type in the country.”

From the early 1960s there was discussion on the need for an Arts/Leisure centre in the new town of Stevenage and in 1968 Stevenage Arts Trust resolved to commence the building of an Arts Centre on land granted by Stevenage Development Corporation. Architects Messiers Vincent, Gorbing and Partners drew up detailed plans for a 488-seat theatre to cost £300,000. The scheme was put on hold due to a lack of capital. In 1968 a feasibility study was commissioned by Stevenage Urban District Council and the Stevenage Development Corporation for a combined Arts/Sports Centre and in 1969 Stevenage Urban District Council and Stevenage Development Corporation accepted the Initial Design Brief prepared by the architects. In 1972, the architects confirmed that the final design drawings were completed, the final cost was estimated at £1,610,218. Opening for The Danesgate Theatre, as the building was then to be known, was planned for November 1975. On the suggestion of Roger Dyason, the first Arts’ Manager of the Centre, proposal was made in August 1975 to a Full Council Meeting of Stevenage Borough Council that the theatre should be named The Gordon Craig Theatre.  This motion was passed. The £2.7 million sports and arts centre opened to the public on 3rd November 1975.

The programme for the opening month of the theatre concentrated on performances by local artists. These included Twelfth Night by the North Herts Youth Theatre, and concerts by the Stevenage Youth Orchestra (accompanied by the Stevenage Ladies’ Choir and Stevenage Male Voice Choir) and Stevenage Symphony Chorus and Orchestra and The Gilbert and Sullivan Story by the Lytton Players. After the performance of the latter, one of the soloists Ray Gorbing confessed his relief, for as the architect responsible for the design of the Theatre, he had some concerns regarding the accuracy of his acoustic calculations. Happily, his fears proved unfounded.

The English Sinfonia orchestra made the theatre their home in 1997. To celebrate the move, they commissioned Michael Nyman to write Strong on Oaks, Strong on the Causes of Oaks, a five-movement orchestral work taking its name from the Anglo-Saxon name of the town, “Sithenaece” meaning “Strong on Oaks.”

The Gordon Craig Theatre’s professionally produced pantomimes have remained consistently popular and are amongst the longest running (over 8 weeks) in the country. The 2018/2019 panto season marked actor/director Paul Laidlaw’s 32nd year performing in the festive show.

For well over 40 years, the theatre’s audiences have been plentiful and loyal, attracted by highly diverse programming from the unapologetically lowbrow to the esoteric – The Gordon Craig has truly served the broad community of Stevenage.

Stories from The Gordon Craig